This week marks the one year anniversary of my move to London. Plenty has happened in that time – I’ve met new people, experienced new things, and had all the highs and lows anyone can expect over the course of a year.

Throughout it all, there were often headphones over my ears or music piping out of my laptop. Being the nostalgic kind of guy I am, I realised that a rundown of the music I’ve listened to over the last year probably provides a pretty fair soundtrack to all that’s gone on, and will trigger memories of what being this newbie in London has been all about. So, with the usual help of last.fm, I compiled a chart of my top 52 tracks from the last 52 weeks.

But, not content with just compiling a music chart, I decided to make a chart of a chart! I’ve been trying to experiment more with infographics, illustrations, and visual stuff of late, so this seemed an ideal opportunitity to add some annotations and colours to what might otherwise be* a pretty bland list. It’s been useful to play about in Inkscape for the afternoon, anyway.

Now, ten points to whoever spots the first typo… 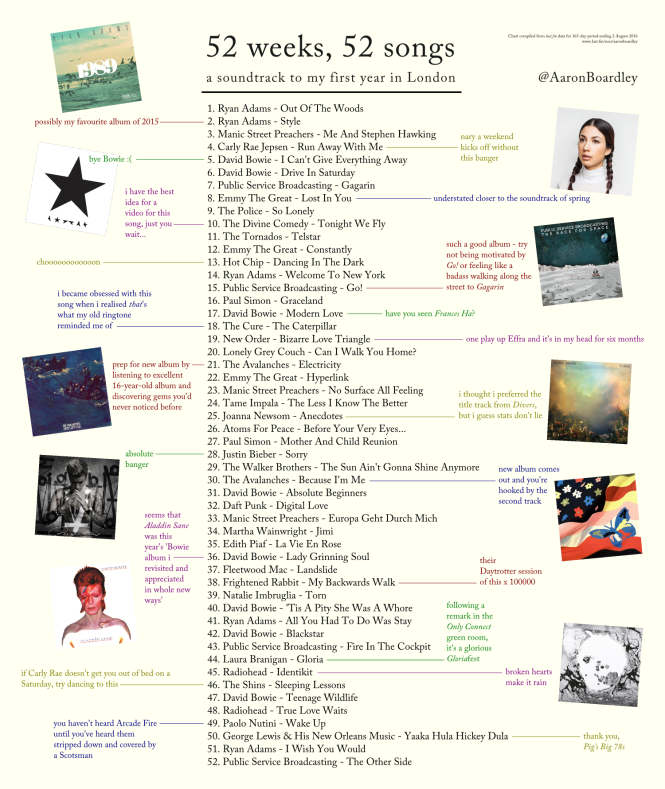 I’m a fan of last.fm for keeping track of the music I’m listening to. Having the stats serves virtually no practical purpose, but I do find it interesting to look back and see the trends in my own music habits. Now seems as apt time as any to look back at the last twelve months and ask – who did I listen to this year?

No real surprises – I spend most of my time listening to the music I’ve already bought and liked, so there’s not a lot of new music in the top ten. Paul Simon was given a boost (as were Simon & Garfunkel) in the excitement of booking to see him live in 2015. Conversely, Kate Bush enjoyed a similar boost in my distress at not getting tickets to her Before the Dawn shows in September (I was on a train to an Only Connect audition when they went on sale) – though she’d doubtless be high in the rankings anyway.

God Help The Girl – a film I helped to fund back in 2012 – was finally released this summer, and I have given the new soundtrack album plenty of spins since its launch. I’ve also continued to enjoy the original 2009 GHTG album on which the film is based, and was pleased to see its lead singer Catherine Ireton at the Edinburgh Fringe in August. Since both albums are simply credited to God Help The Girl, its singular inclusion in the chart disguises songs from rather a few vocalists – but it deserves a place nevertheless. As a funder of the musical film, I was pleased to attend a special screening in London where I got to meet director Stuart Murdoch (below). His band, Belle and Sebastian, have also been regulars on playlists this year.

Me with Stuart Murdoch

Fleetwood Mac have done well to sneak in to the top ten, although Rumours is never far from the play button. Radiohead always make the rankings, and I maintain that music from The Kleptones is some of the best out there available for free. As my Bowie collection has grown I have more and more of his music to choose from. Why the heck wouldn’t I listen to it every day?

The Manics top it off though, thanks largely to their Roundhouse gigs in December. Twelve years since the first and only other time I’d seen them live, I was in the nostalgic crowd as they played their seminal The Holy Bible in full, followed by hits from across their career including songs from the two albums they released in 2014. Futurology, the latter of these, stands out as the best thing they’ve done in years, and crowned their position at the top of my 2014 charts.

Special mention must also go to The Polyphonic Spree, who just missed out at number eleven in my chart. One night in June I found out at the last minute that they were playing Bristol’s Trinity Centre – a 20 minute walk from my house – and decided to attend on a whim. I’m so glad I did, as I can gladly say it was the most enjoyable gig I’ve ever attended. As the huge ensemble played and danced in unison to their own fantastic songs and some great covers, I was hooked – and they made us all part of it. Soldier Girl will now forever remind me of jumping up and down with lead singer Tim DeLaughter in the middle of the hall. I can’t help but smile when I remember it. Go and enjoy them live if you can.

The other live music to mention is of course Glastonbury Festival. I saw plenty of acts throughout the event, but I have to give a nod here to the New York Brass Band who were easily my musical highlight of the week – to be honest, they’re in close contention with The Polyphonic Spree for musical highlight of the year. They do funky brassy covers of all kinds of songs whilst encouraging dance-offs, climbing speaker stacks, and forming conga lines. They’re tremendous fun. If you’re due to get married and thinking of inviting me, please book them. Please.

So, what will 2015 hold? Another Glastonbury, a new Belle and Sebastian album, more Bowie? Everything else is to play for. If you’d like to recommend me something, why not make me a mix CD? Bonus points if it has great artwork. Get in touch if you want to know where to send it. Here’s a sound new year!