Last Saturday saw the final of the 2015 Eurovision Song Contest, in which the viewers decided their favourite act was, again, Sweden. For me, though, Eurovision is more than a spectator event. Awarding your own scores at home can be pretty fun too.

So, as my friends the Bentleys invited me once again to their Eurovision party, I got an opportunity to play with the fifth incarnation of my Eurovision spreadsheet. With its help I can tell you that as a group we liked Australia the best, were bored by Hungary, and found Sweden more fun to watch than to listen to.

The spreadsheet makes use of a scoring system proposed by the BBC a few years ago, in which partygoers award marks out of ten to each country in three categories: songcraft, musical performance, and visual performance. Crunching these scores with some lookup functions and pretty conditional formatting, the workbook spits out reports of the best and worst country in each category, the most generous and stingy markers, and ranked total scores. 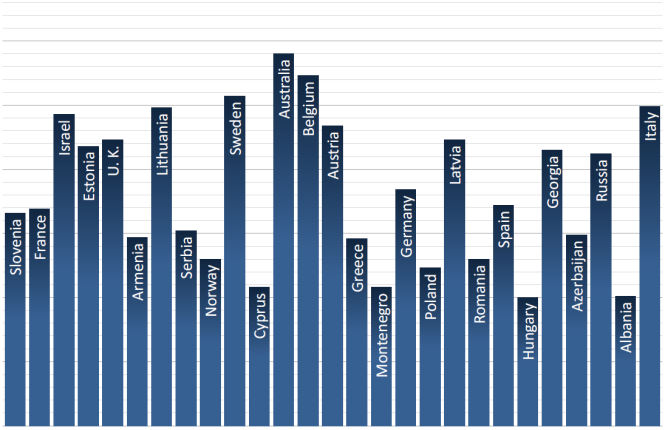 Total scores awarded to acts by the Bentley party, in order of performance.

There was a clear gap between our top twelve for the night (Australia, Belgium, Sweden, Italy, Lithuania, Israel, Austria, Latvia, United Kingdom, Estonia, Georgia, Russia) and the rest of the pack. Though there was some obvious pro-U.K. bias at our party, we were still disappointed (though not at all surprised) to see it rank so low overall in the real scores, while I was shocked to see hosts Austria earn nil points this year – THEY HAD A FLAMING PIANO ON STAGE FOR GOODNESS SAKE! 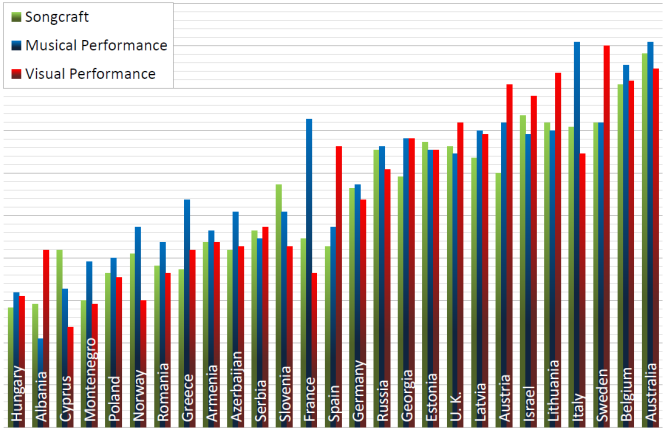 Average scores (out of ten) awarded in each category, sorted by total. You may now judge us.

Splitting our scores by category it’s clear that some countries (Italy, France) provided singers of a much higher calibre than the piece they were there to perform, whilst others (Sweden, Spain) were favoured far more for their visuals, costumes and dancing than their music – in our opinions, at least.

Eurovision’s just a bit of fun, and a chance to shout at the telly with friends, but I won’t pretend I don’t enjoy getting a bit deeper into what our party thought of what went on before us. If you’d like to do similar, you’re welcome to download a copy of my spreadsheet and adapt it to your own needs next time. There’s still the odd bug, but it improves every year – get in touch if you’ve got any ideas for development.

For now, though, congratulations to Sweden. See you next May!