It’s been a year of good new music, plenty of old music, enjoyable live music, and much singing in the kitchen. At this time of year, I like to reflect on what was making my ears happy over the last months. So, with the help of last.fm, I present the chart of my most listened-to artists, 2015:

There’s not an awful lot of difference to last year’s top ten – I’m a man of consistent tastes. New music is only really represented by Belle and Sebastian, who chucked out a new album in January, and Ryan Adams, whose cover of Taylor Swift’s 1989 has been one of my favourite albums of the year.

In fact, Taylor herself didn’t do so badly in my charts, just out of the top ten but slam-dunking in at number 13 thanks to several spins of 1989 and the rest of her back catalogue – it helps that I’ve moved into a flat full of Swift fans. Apart from the old stalwarts of the Manics, Radiohead, Bush and Bowie, the rest of my top artists can largely be linked to the music I’ve seen live – while Bruce Springsteen and Fleetwood Mac prop up the top ten by virtue of just being great.

In April I had an awesome night at London’s O2 to watch Sting and Paul Simon play a solid three hours of tight, moving and outright rocking music. Attracted to get tickets by Simon’s presence, I was pleasantly surprised by how much Sting I enjoyed. Since then, I’ve listened to a lot of Sting and The Police, who just miss out on the top ten as separate entities – though if I combined play counts they would jump to number 5, just behind Paul Simon himself (though that’s without songs by Simon & Garfunkel – at number 20 as a duo).

After last year’s most amazing gig in Bristol, I jumped right in for more Polyphonic Spree tickets and saw them play the entirety of their first album, plus a few hits besides, in London in September – and have filled up my collection with the rest of their back catalogue since. My other live music highlight has to be Joanna Newsom at the Hammersmith Apollo in November. Her beautiful, beautiful music had the audience totally hushed and I’m certain there were a few tears in the crowd as she played harps, piano and all sorts of other instruments I couldn’t name. Her new album, released a few weeks prior, has also received a few plays – popping her at number 16. 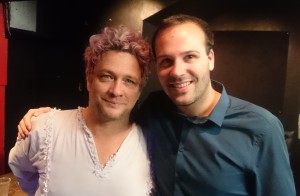 Me with Tim DeLaughter of The Polyphonic Spree

While I also saw The War On Drugs in February this year, the other special mentions for live music have to be from my third Glastonbury festival. Florence + The Machine impressively stepped up to the headline slot, The Libertines’ surprise addition created one of the best atmospheres I’ve ever been a part of at the Pyramid Stage – until Lionel Richie crammed it full the next day for tremendous fun sing-alongs, and I’m really glad I got to see the rousing set from Duke Special (and have him stage dive on me at the end). Plus, after giving up on Kanye after three songs, I’m so pleased I went to see Suede headlining the John Peel stage. Superb guitar music for a superb Saturday night.

A final nod from the top twenty has to go to Public Service Broadcasting. Thanks to a recommendation from podcaster Brady Haran, I have feasted on their album The Race For Space time after time again since the summer. I could give a blow-by-blow recommendation for most its fantastic tracks, but I’m sure I’ve rambled enough. Why not set aside an hour to just listen to it?

As we wave goodbye to the musical highlights of 2015, and look ahead at what 2016 will stir in us, I’ll leave you with a song that caught my attention on the radio last summer and has been in my head, if not played out loud, every day since:

Wouldn’t it be terrible if there’s no music?